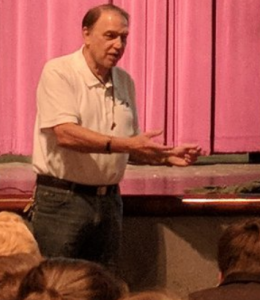 Where the journey started.

I am a native of Greensboro, NC.

I am a US Army combat veteran of the Vietnam War and served with the 1/12 First Cavalry Division (Air Mobile). My primary MOS (Military Occupation Specialty) was RTO (Radio Telephone Operator). The Army often assigned me to other duties and areas of responsibilities including demolitions, machine gunner, medic, artillery and bugler. Before my tour of duty was over, I was promoted to the Battalion’s Chief Radio Operator. I was awarded the COMBAT INFANTRYMAN’S BADGE and BRONZE STAR. I was also awarded the VALOROUS UNIT AWARD FOR EXTRAORDINARY HEROISM for my part in the 27- day Siege of Fire Support Base Pace in October of 1971.

Upon my return from Vietnam, I played trumpet with the Winston Salem Symphony for the summer season and then served as the Band Director for the Goldsboro City School System for the 1972-1973 school year. Following that, I played professionally with the Burt Massengale Band headquartered in Greensboro.

In 1976 we added insurance and securities to our investment offerings through a local Financial Planning firm and its affiliated broker/dealer.

I married Joanne Ross of Greensboro, NC in 1979 and we have three children, Justin, Brian and Kaitlyn. We also have two grandchildren, Marshall and Sadie.

I completed my Certified Financial Planner, CFP ® designation in 1987 and launched my Financial Planning Business under the name of Capital Preservation Group, Inc. I worked with individuals and families and also developed a clientele of small business executives. A primary focus of my practice has always been to identify a client’s financial strengths and weaknesses and to show how to more effectively use their financial resources and the tax laws to meet their financial goals.

My family and I moved to Raleigh in 1990 after I interviewed for and was offered the position of NC State University Financial Planner in late 1989. My role as University Financial Planner was to increase the overall participation of the faculty and staff in the university’s financial benefits. This was accomplished primarily through seminars, workshops and individual consultations. Over the course of the 2 ½ years that I served in this position, I met with over 1200 faculty and staff members on an individual basis, reviewing their financial goals and objectives, current assets and liabilities, taxes and insurance needs in order assist them in more effectively reaching their goals.

At my request, I resigned my position as University Financial Planner in 1992 and represented one of the approved 403(b) Tax Sheltered Annuity vendors until 2001.

When I left the university I become the first Crown Capital Securities, L.P. Branch Manager in Raleigh, NC.

My interests are in continuing to play trumpet and flugelhorn at my church. I have also written a memoir of my tour of duty in the Vietnam War and shared my experiences and life lessons from the war with thousands of high school students as a part of the Lessons of Vietnam curriculum. I am also a member of BUGLES ACROSS AMERICA and NORTH CAROLINA VIETNAM VETERANS, INC..